The enjoyment of my new iPhone 6S was short-lived as I soon noticed it would regularly run very hot (even when sitting in my pocket doing nothing) and the battery life sucked (I churned through a full charge in just 2 hours one day).

A few online reviews were critical of the smaller battery in the iPhone 6S and the lack of “all day” battery life. I work from home and am always close to a charger anyway, but 2 hours is ridiculous. And with the phone running so hot I figured something was hammering the CPU or antenna pretty hard, causing the battery to drain faster. But no amount of killing background apps, restarted the phone, or turning off location-based features such as Find My iPhone was helping.

After I tweeted about it I got a helpful reply from Barry Saunders that pointed me towards a potential solution.

A glance at the battery usage for apps on my phone indicated that Barry was correct. So I uninstalled the Facebook app and used my phone as normal for a day, and was pleased to see the battery life was very much improved. In fact, it barely moved at all, and I finished the day with more than 2/3rds of a charge remaining.

So the next day I decided to reinstall Facebook, as it seemed like there was an update version available. Plus I really like having Facebook handy. For the next 48 hours with Facebook installed and normal phone usage the battery life was fine, but then the heat problems returned and the battery started draining again.

Before I uninstalled Facebook one more time I took this screenshot of 24 hours of battery usage. Facebook really stands out as a problem here. In reality the phone would have only come off the charger a few hours before this screenshot was taken. 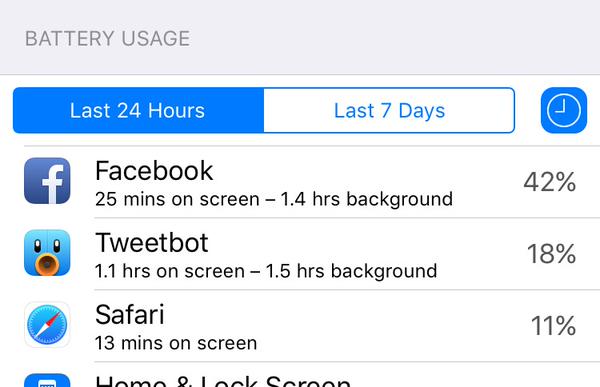 Once again my phone is back to normal with all day battery life for my usage. I’ve been out of the house this morning for about 3 hours using Fitocracy, Tweetbot, and tethering my laptop to it and the battery is still above 75%.

So it looks like Facebook is the culprit, and will be staying off my phone until it’s fixed. For now I’ll use the web app instead, which isn’t anywhere near as usable as the app but is good enough to at least keep up with anything important.

Update 19/10 – I’m not alone (see here and here) and TechCrunch reports that Facebook is aware of the issue and looking into a fix.