Recently I purchased a new Lenovo Yoga 900 notebook. If you’re considering buying one for yourself, then this post might be helpful to you. 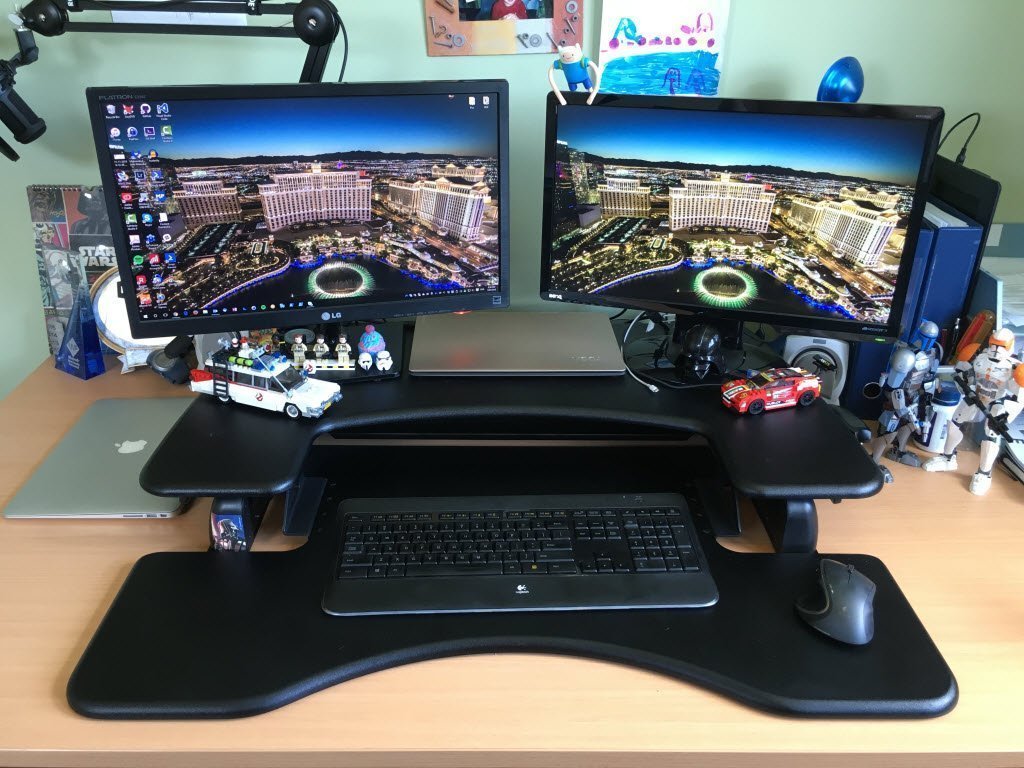 For a little over 3 years I’ve been using a 13″ MacBook Air as my “away from desk” computer. The MacBook Air is a beautiful machine. The size, weight, build quality, battery life, everything about it was good. In particular, the touchpad is the best I’ve ever used. And OSX has also been fine for most of my computing needs.

The MacBook Air won because at the time there were no decent Windows ultrabooks available. Every Windows laptop I’d owned up until that point was a brick. A heavy, inconvenient thing that rarely left the desk it was sitting on. So I bought a MacBook Air, and have had no complaints.

But today my trusty MacBook Air (which is in near mint condition and still gets 8-10 hours battery thanks to a Genius bar appointment last year) can’t do everything I need. For one thing, it only has 8GB of memory, so running enough VMs for even a simple scenario is out of the question. I also have some issues with switching between editing a document on Office for Mac and Office for Windows. And of course, there’s no PowerShell, so if I want to run scripts I need to use a Windows VM or RDP to a Windows computer. The MacBook Air had been reduced to podcasting duties only, and I needed a replacement.

Over the Christmas break I researched my options. I had a few basic requirements:

The i7 and the SSD weren’t difficult. But the 16GB memory requirement narrowed the search very quickly. It came down to a few options:

Why no Dell, or HP, or $vendor in that list? Either I ruled them out for not meeting one of my requirements, couldn’t find enough reviews to trust their product, or I have no prior experience buying from them.

The Lenovo Yoga 900 won. The main factor that decided it was price. All the other options were insanely expensive. The Yoga 900 wasn’t cheap (I’ve tried cheap, sub-$900 laptops before from other brands, and they weren’t powerful enough for me), but not so expensive that I would worry about travelling with it or using it around the pool. The new stuff Lenovo announced at CES looks nice, but is either launching months from now, or will be too expensive here in Australia.

The other factor was usability. The Surface Pro form factor doesn’t work for me. I have a Pro 2, and it sits in my home gym for watching movies while I work out. Travelling with the Surface was an awkward, uncomfortable experience, as is trying to use the thing on the couch. I need the stability of a proper laptop.

Side note: I was disappointed with Lenovo and the Superfish debacle last year. So much so that I considered never buying a Lenovo product again. But then Dell had their own “Superfish” moment as well, and I realised that every vendor screws something like this up eventually. I’ll end up with no vendors I’m willing to buy from. And there’s no point ruling out entire hardware brands just because somewhere in the company a few people made a bad decision. Wiping factory builds and installing a clean OS is all any of us can really do if vendor-installed software is a concern.

Hardware vendors love creating an “unboxing experience” these days, and Lenovo is no exception. The Yoga 900 comes in a nice box that is easy to open and unpack, unlike the “rip and tear” we had to go through years ago. 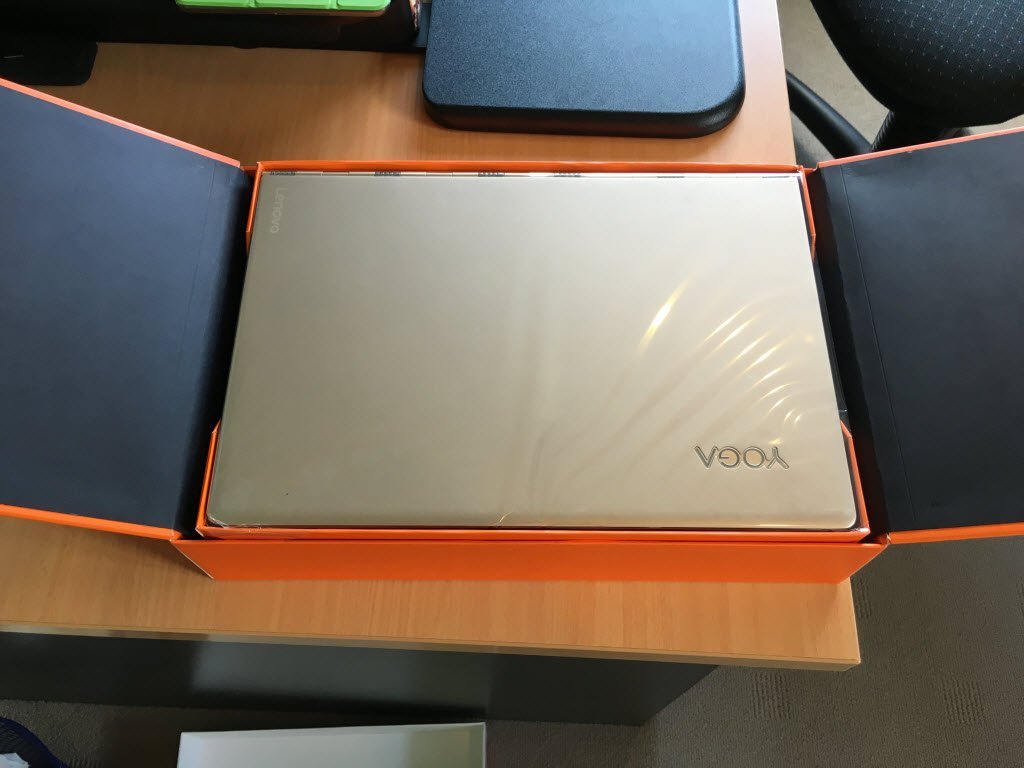 The size and weight are fine, pretty much equal to my old 13″ MacBook Air. A few mm and a few grams difference I guess. When I hold one in each hand I can’t tell the difference in weight. And both of them fit in the same padded sleeve I use when I’m taking a laptop with me in my bag. 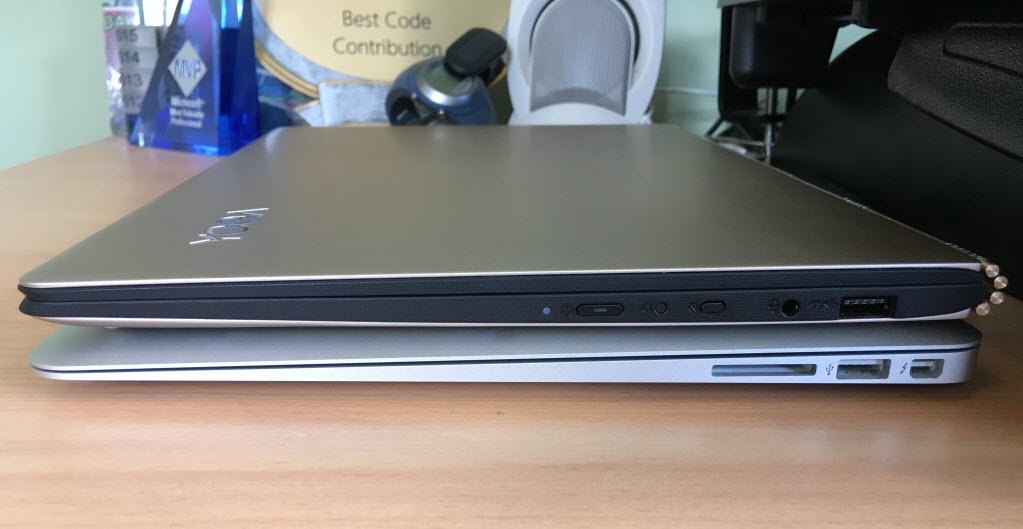 The Yoga 900 fits neatly into the space on my Varidesk between the two monitors, where I charge it. 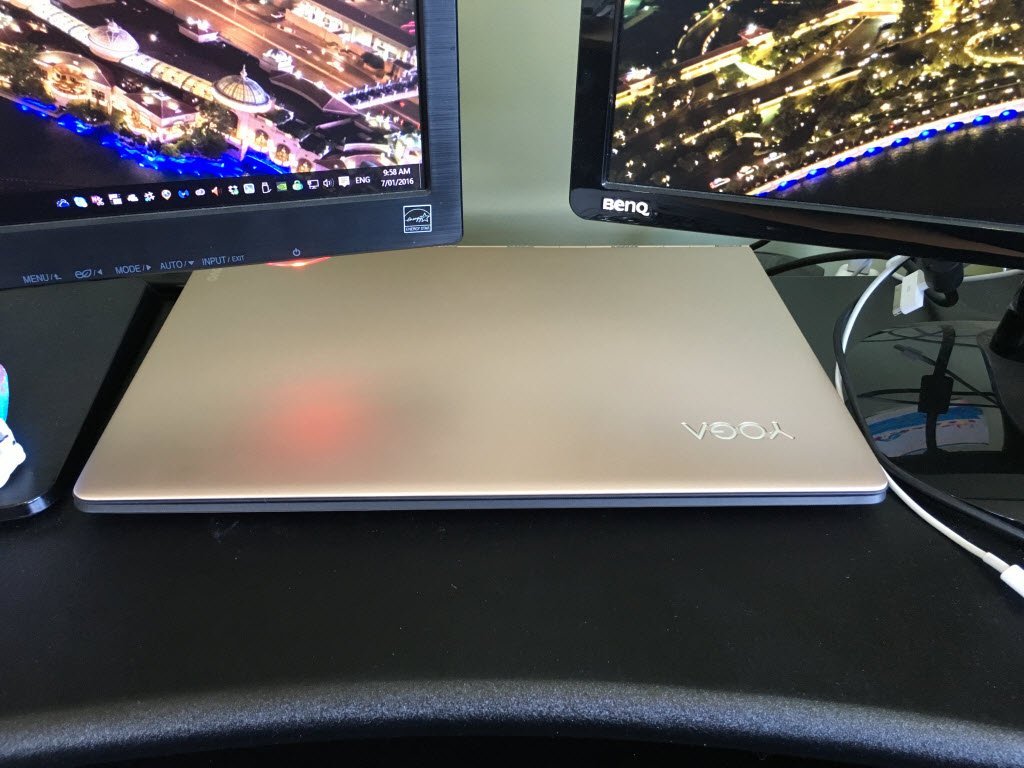 If I happen to need to use it at my desk, it fits on the tray as well. But mostly I use it away from my desk. 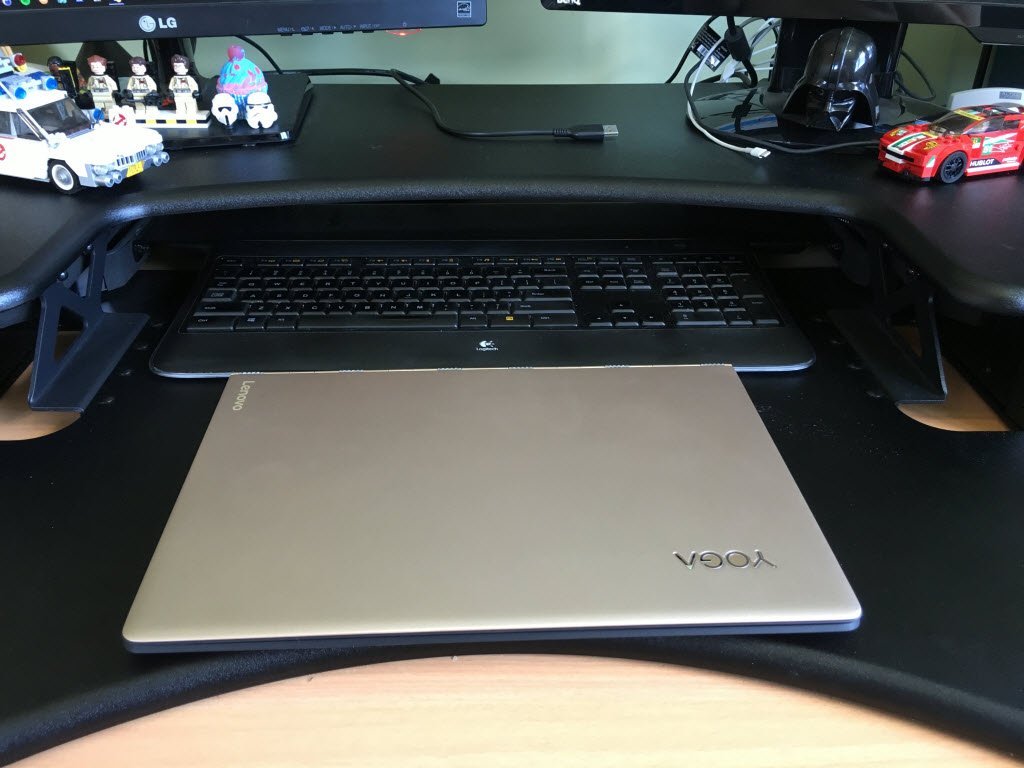 The watch-band hinge of the Yoga 900 lets me convert it into a standing position if I want to watch some Netflix while I’m making dinner. I thought the convertibility might be a dorky gimmick, but it is actually useful for this situation. 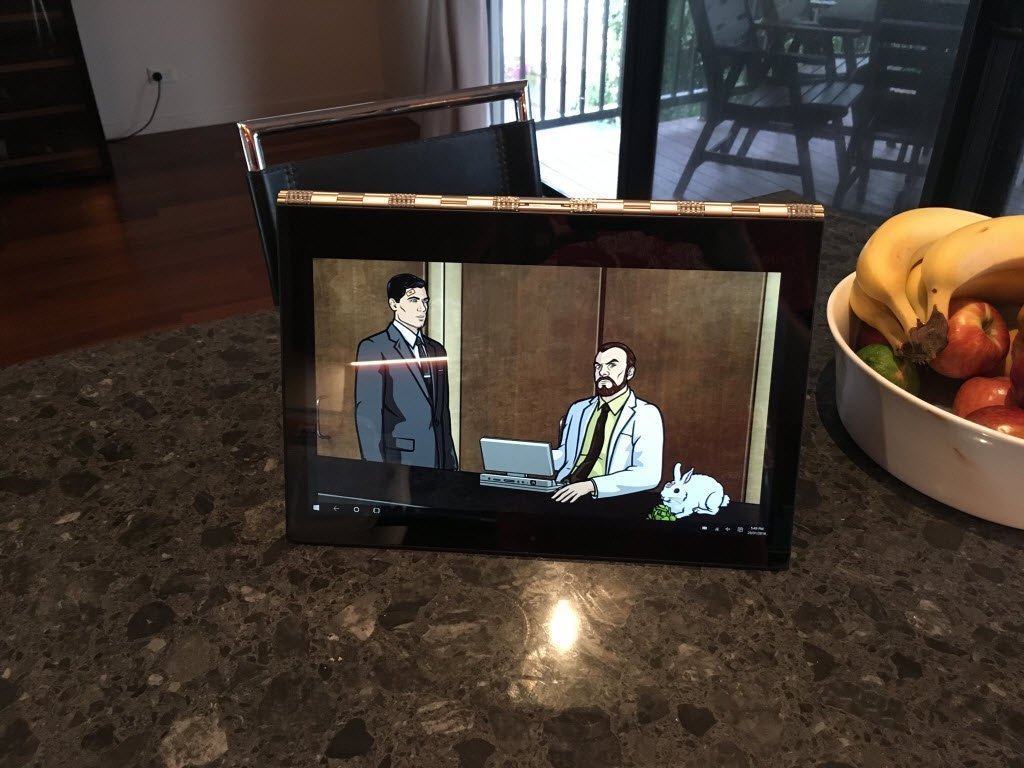 The Yoga 900 can fold completely back and be used like a tablet, but it’s a bit large and heavy for that, in my opinion. Which is fine, I don’t want to use it as a tablet. I have an iPad Mini for that.

The keyboard and touch pad are nice. The keyboard isn’t as friendly to my light typing style as the MacBook Air is. I need to hit the keys a little harder. There’s some light bleeding out from under the function keys as well when I turn on the back light. I still hit “Home” instead of “Backspace” sometimes. The touch pad is the best I’ve ever used on a Windows computer. Still not as good as a MacBook, but good enough. I have a little trouble with right-click accuracy from time to time. All up, it’s good enough and I’ll get used to those few little things in time.

The screen is so glossy it is practically a mirror. The Yoga 900 has a touch screen, but I try not to use touch very often, because it’s so easy to leave finger marks and smudges. 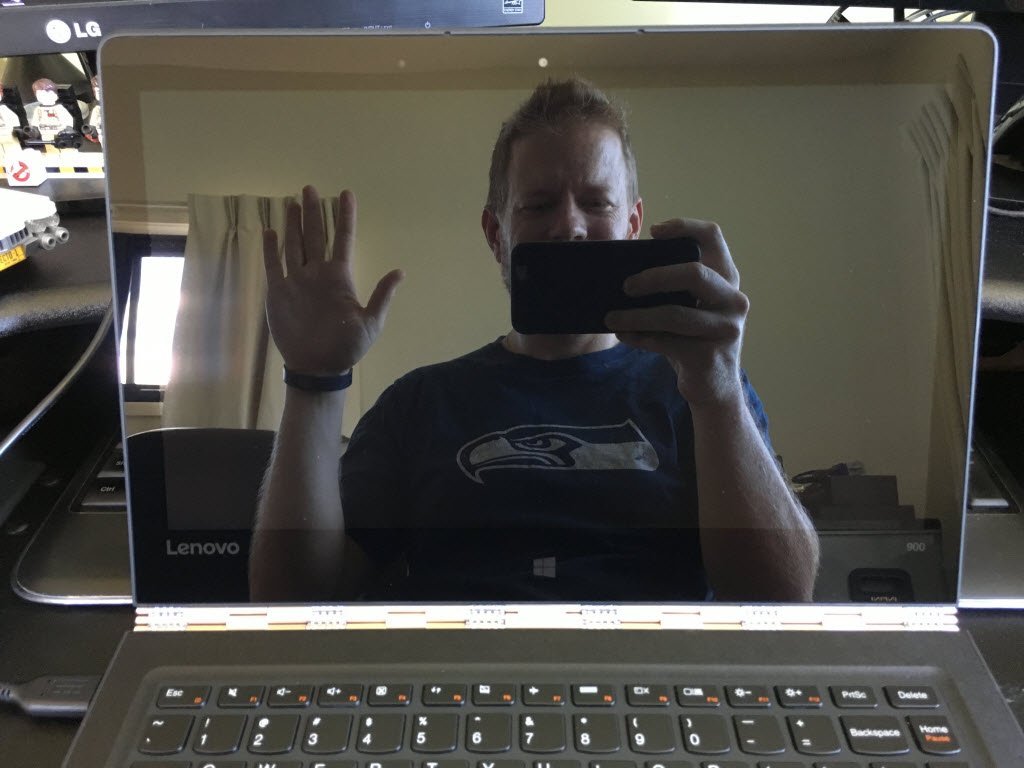 I only booted the OEM build long enough to copy the device drivers off the utility partition. Then I set about wiping the machine and installing a clean OS. One reason for that is to get rid of any OEM bloatware. Another reason is that the Yoga 900 comes with Windows 10 Home, whereas I want Windows 10 Pro so I can encrypt the hard drive with Bitlocker. Not only that, all the OEM partitions take up way too much disk space. I want the maximum space possible for storing VMs (and also because I paid for it, dammit!)

Try working out how to boot a Yoga 900 into the BIOS without any help from Google! I gave up, and searched online. Turns out there’s a small button on the side, next to the power button, that you can press with the tip of a pen to start up into a boot menu.

When you create a USB boot disk (the Yoga 900 has no optical drive), use Rufus so that it is a UEFI compatible boot disk. Make sure you the partition scheme is GPT and the file system is FAT32 before you click Start. When I was using Rufus it had a habit of switching those settings to other choices, for reasons I never worked out. Just double check yours before you click Start. 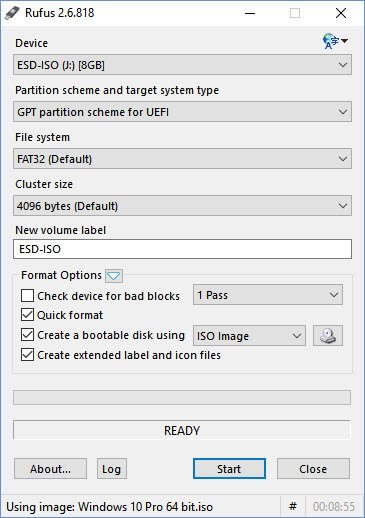 Delete all the OEM partitions and use all that glorious disk space for yourself! 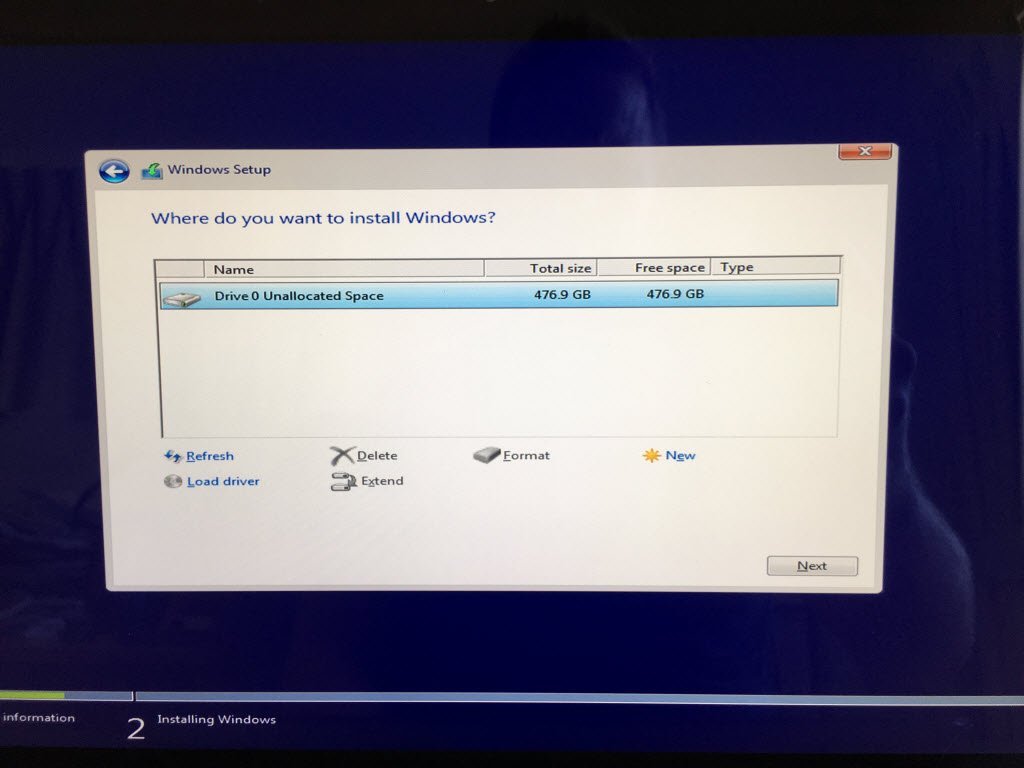 After setup all I needed to do was login with my Microsoft Account, install Office 365, DropBox, and a few other tools I use regularly, and I was up and running. Cloud FTW!

I’ve owned the Yoga 900 for about 3 weeks now. So how is it going after some solid usage?

First, I will say I’m happy with it. The Yoga 900 has absolutely fulfilled my need of being able to work away from my desk with my full set of Windows apps and tools. It’s comfortable to use on the couch, and easy to take with me away from the house.

It took a few days to get the touch pad sensitivity and palm blocking set just right for me in Windows. I don’t know who likes the default settings for those, they’re way off what is comfortable for me. But maybe I’m the odd one out. Funny that the MacBook touch pad never needed any adjustment to be comfortable for me.

The touch pad is showing a glossy patch where my fingers rub against it the most. Cleaning my hands doesn’t seem to help at all. It’s probably just because it is black, whereas the silver MacBook touch pad doesn’t show up any of that. 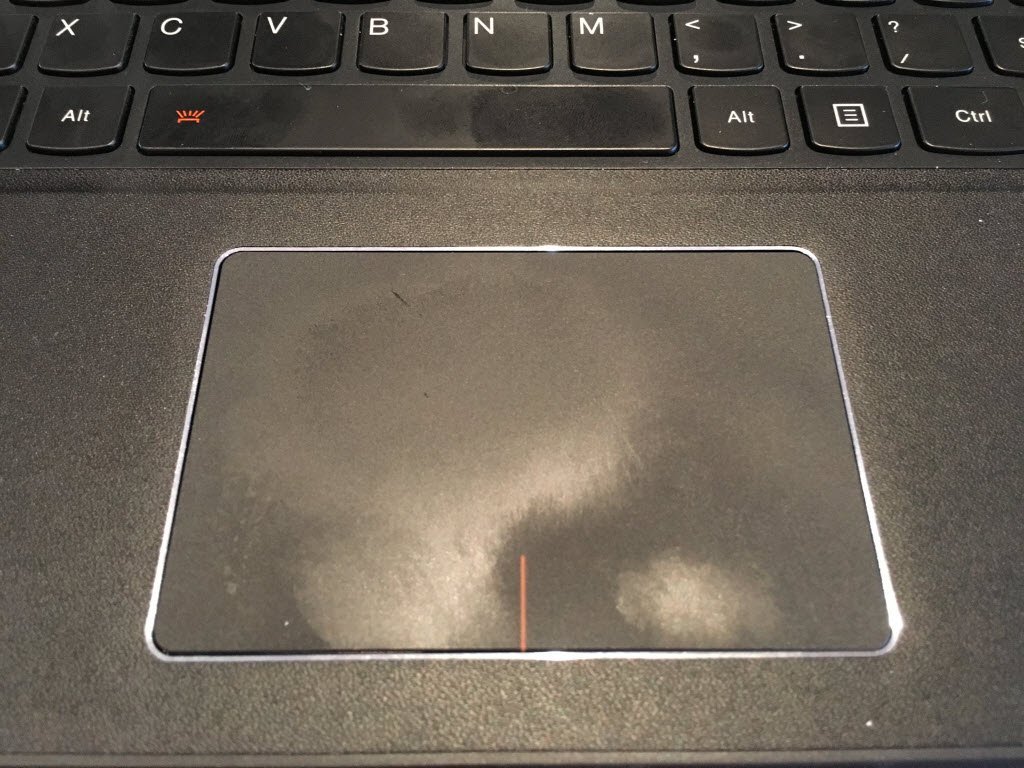 Performance-wise the Yoga 900 is great. It boots fast, everything runs fast. I can create and launch VMs quickly, blow them away, rebuild them again from a script, no problems at all. The battery life has also proven to be long lasting.

As an entertainment device it works well. The screen and speakers are good for those kitchen Netflix situations, much better than the iPad Mini. But on a plane or sitting in an airport lounge I prefer to watch movies on the iPad with headphones on.

I have a very good desktop computer right now, but if I didn’t (or if it was getting old enough to replace) I would seriously look at USB docking stations that can handle multiple monitors and use the Yoga 900 as my primary workstation as well. The desktop computer has way more SATA storage in it for photos and things, but I could add the same capacity to the Yoga 900 with a simple NAS device.

In summary, the Yoga 900 has turned out to be a good purchase for me.