A few weeks ago I received my Pebble smartwatch and have been using it ever since. In this post I’ll share my initial impressions, as well as how I am using my Pebble. 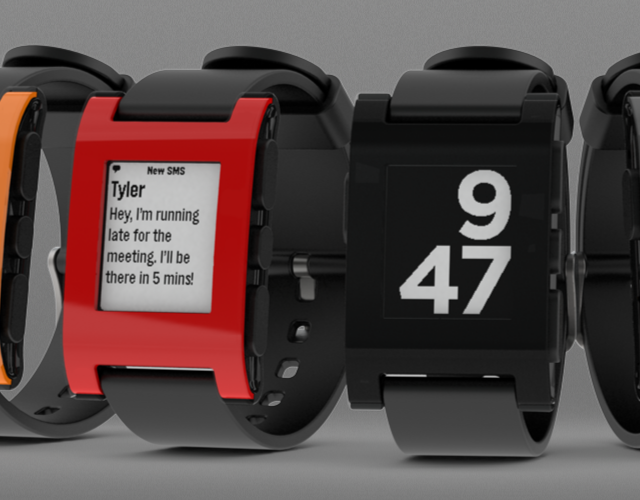 I bought my Pebble during a sale that offered about $20 off the regular price of $150 USD. I reinvested that $20 saving into expedited shipping, which is $25 extra, so all up I paid $155 USD and my watch arrived in about 5 days (or fewer, if you don’t count the extra day because nobody was home to sign for it on the first delivery attempt).

So they certainly seem to have fulfilment under control, though there were a few colours on back order. I chose black because it seemed like the best choice of the colours that were actually in stock.

For some reason I was expecting the packaging to be cheap but instead Pebble arrived in a very slick, professional looking box. 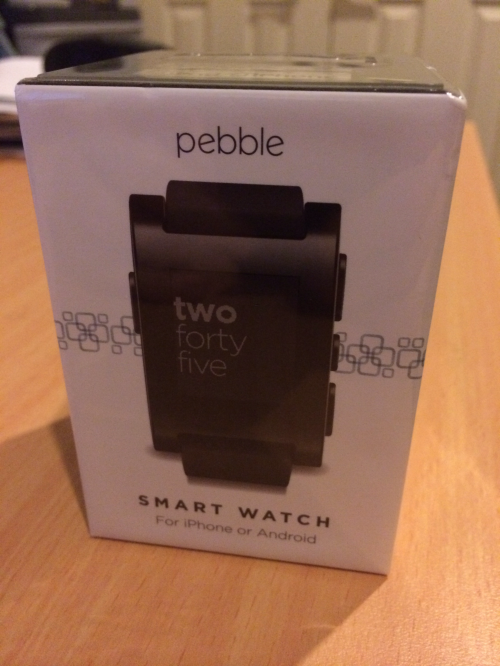 Out of the box there was enough battery charge to power it on and get started, but I still connected it to the charging cable straight away to get it charging anyway. 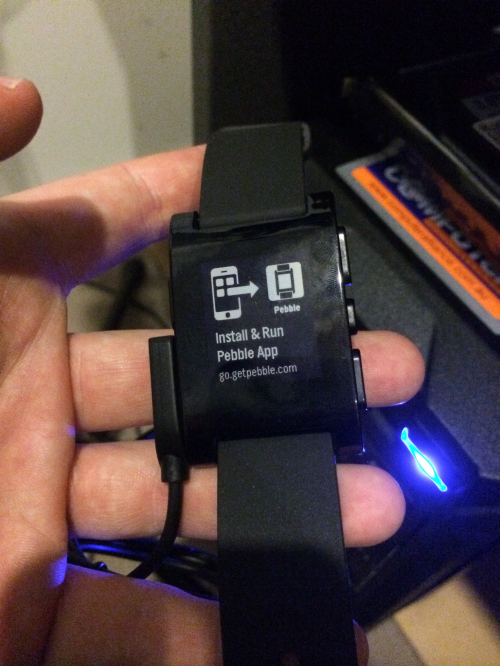 The charging cable supplied is a USB cable with a magnetic connector for attaching it to Pebble. There is no power adapter supplied but fortunately I have a few spare USB power adapters from old smartphones so I am able to charge my Pebble without connecting it to a computer.

Following the instructions I downloaded the Pebble app for iOS and set up the Bluetooth connection to my iPhone, and that was all it took to get up and running.

At first Pebble looked out of place on my wrist, only because it was new. After a few days it looked fine to me.

Pebble isn’t a particularly stylish watch but it doesn’t look out of place. Both my regular watch and my Garmin sports watch/GPS have a curve that sits almost perfectly on my wrist, whereas the Pebble is flatter and doesn’t sit as well, but not in a bad way. This is something I think they could fix in later hardware versions. Then again, everyone has different size wrists so maybe it isn’t a widespread issue.

Now that I’ve seen Pebble in real life I think I may have preferred a different colour, perhaps the silver. But the black still looks good and I will probably look at replacing the plain black wristband with something different in future.

Update – at CES 2014 Pebble announced the new Pebble Steel. They look pretty cool, more of a dress watch style than sports watch. Price is expected to be $249 at launch.

Using Pebble as a Watch

If your only reason for buying Pebble was to wear a watch then you could still have a good time playing with the different watch faces. I have a few of the standard ones loaded and switch between them depending on my mood.

I am a bit of a geek so the watch faces are fun but there is more to Pebble than just telling time.

Using Pebble as a Smartwatch

The term “smartwatch” seems to confuse people when they ask me about my Pebble. There is a an expectation that the watch is like a mini iPhone with apps and a touchscreen and all that goodness.

Of course that is not the case with Pebble, which uses Bluetooth to connect to your phone (iPhone or Android) and can be configured to receive notifications and display information from apps. There are some other things as well such as controlling the camera in your phone, and a world of possibilities for app development, but I haven’t explored that area much. I’ve seen people with custom watch faces displaying the time, their next appointment, the weather, a stock ticker, all on the one screen. That is pretty neat, but for now it is more than I’m trying to do with my Pebble.

Primarily I wanted to see if the notifications were a useful way of staying connected without the distraction of pulling out my actual phone. I turned on a bunch of app notifications and spent a week or so working out what I did and didn’t watch to have appear on my wrist.

By the end of that exercise I’d narrowed it down to:

Those all fall into the “mostly important/urgent or at least stuff I want to glance at quickly”.

The advantage of having a txt message from my wife appear on my wrist is that I can read the low urgency stuff (like a message letting me know she arrived safely at her destination) without getting out my phone. In some cases without even being in the same room as my phone. So I avoid the temptation to explore other distractions while my phone is in my hand, and can stay focussed on whatever else I’m doing (like playing with the kids). It also means I don’t need to keep my phone on me in the house. If the message does turn out to be urgent or need a response, I can go grab my phone and deal with it.

(If you’ve already got a handle on those kinds of distractions then I applaud you. It is something I’m still working on and Pebble is helping me with :))

How It’s Going for Me

The calendar reminders have saved me on several occasions at work already. Quite often I seem to get caught in a discussion away from my desk and either left my phone behind or don’t feel it buzz in my pocket with a meeting reminder. Having the Pebble vibrate on my wrist and tell me where I need to be in the next 10 minutes has been very useful.

I’ve also found some situations where Pebble is very convenient, such as when I’m out somewhere taking photos, I can leave my phone safely in my backpack instead of in my pocket where it might slip out, and still get important notifications.

I’ve thought about using it to track my exercise with Runkeeper (which integrates with Pebble), but I already have a Garmin for that purpose which is doing the job just fine, feels sturdier, and works on its own without needing my phone present.

Update – on a recent run I discovered how awesome it is to be able to control your music using Pebble. With my iPhone in my backpack and playing a Spotify playlist I was able to use Pebble to quickly skip any songs I didn’t like.

If my Pebble and phone have been away from each other for a while they seem to lose their pairing and I have gotten used to turning Bluetooth off/on as a precaution when I put the watch on. Maybe there is a better solution for that, but I haven’t really looked into it.

As far as battery life goes, I went about 5 days without charging it and it still reported 12% battery remaining, so the 5-7 days of battery life estimated on the Pebble website seems accurate. I’ve gotten used to just plugging it in every few days.

Do I Need Pebble?

No, but that doesn’t mean it isn’t useful or that I don’t still use it.

After I had gotten used to wearing Pebble I did a little experiment where I switched back to my regular wrist watch for a few days. I did miss having the notifications from Pebble and had to be a little more diligent with my phone, distractions, and calendar awareness.

Pebble definitely helps me. I’m going to keep exploring the possibilities with notifications, apps and watch faces. The Pebble SDK looks promising, being able to receive real time data or control things like your home lighting is pretty cool if you ask me, but it is still early days for real world applications as far as I can tell.

To other people I would say that if you don’t already wear a watch, or hate wearing them, you probably won’t like Pebble. If you do like wearing a watch, aren’t too fussed about style, or are a bit of a geek who wants to explore the applications side of things, then you might just enjoy it.